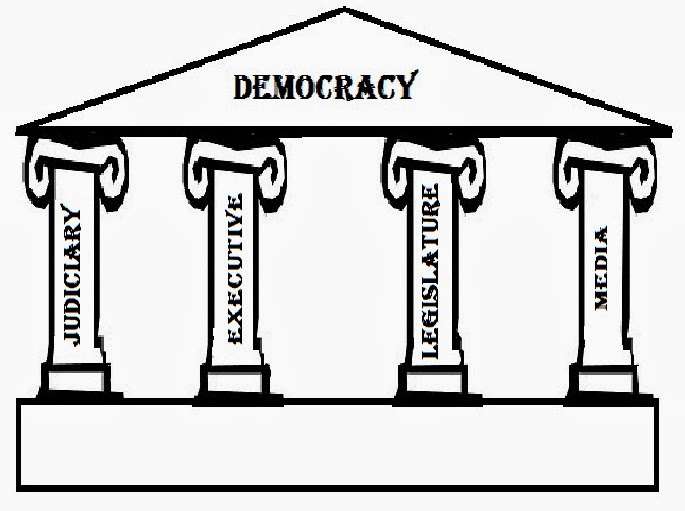 The four pillars of democracy are Judiciary, Executive, Legislature and Media. This fourth pillar of democracy ensure that all people living in far off areas of country are aware of what’s happening in rest of their country. Media ensures transparency in the working of all the above three systems.

These are the four pillars of democracy and if any of these pillars is not working properly then somewhere democracy is still not fully functional.

The powers of each of these pillars vary from country to country. In India, no single pillar is made too strong. In American constitution, judiciary is made powerful whereas in UK, legislature dominates  judiciary.

Media is most powerful entity on earth. It makes us aware of various social, political and economical activities around us. It is like a mirror which shows us the bare truth and harsh realities of life.

Over the years, media has become more active. It is media which reminds the government of its unfulfilled promises, educates masses in rural areas through television, radio and internet and exposes the loopholes in the system. It is the most powerful tool to fight against socio-political evils and injustice in our society, while bringing empowerment to the masses and facilitating development.

In this age of technology we are bombarded with information. The perfect blend of technology and media has left no stone unturned in unearthing corruption and politics in our society. Media has strength and ability to change both social and government attitude towards various key problems. All journalists have responsibility to report unbiased, accurate information as they receive from reliable sources.

Media is a hope that as the fourth pillar of state, it will act as a pillar of democracy for as long as the present political, economic and social structures are moving in the right direction. ere is no doubt that without this key pillar, democracy cannot function properly and will be at risk.