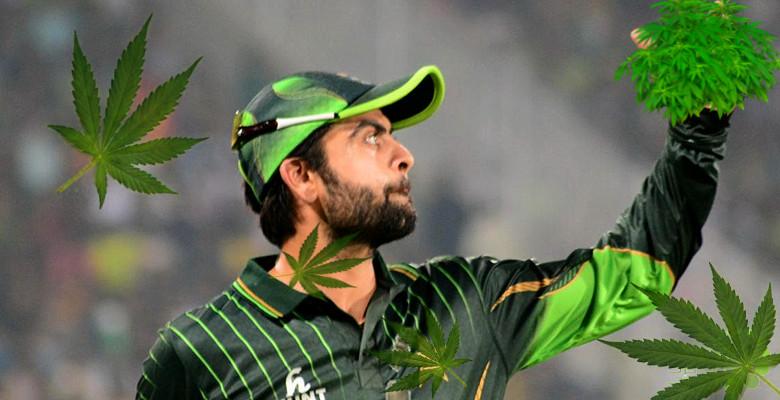 According to reports Pakistani cricketer Ahmed Shehzad has tested positive for marijuana. The test was conducted during PCB’s domestic series, Pakistan Cup.

Ahmad Shahzad has been tested positive for Marijuana – the test was conducted prior to the Scotland series during Pakistan Cup.

Everyone has started castigating Ahmed Shehzad for his use of marijuana. However, not many know that this magical plant has a lot of medical benefits and not everyone smokes weed to get stoned. No Sir, Ahmed Shehzad used it purely for medical purposes. Getting stoned was merely a necessary evil and an unwanted price he had to pay.

Here are all the benefits of marijuana also famously known as weed.

Marijuana may help in slowing down the progression of Alzheimer’s disease, a 2006 study by Kim Janda of the Scripps Research Institute found out. Some of the symptoms of alzheimer’s disease are memory loss, problems performing familiar tasks, vision problems. It is possible Ahmad Shehzad might have suspected that he could suffer from this degenerative disease in future and hence his use of marijuana could have been a preemptive attack?

Weed can be used to treat glaucoma. A glaucoma is a disease which increases pressure in the eyeball, injuring the optic nerve and causing loss of vision. According to United States National Eye Institute, marijuana lowers the pressure inside the eye. Hence, it is quite understandable Ahmad Shehzad wants a perfect vision and he saw hope in this magnificent magical plant. Now what would be the point of playing cricket if you can’t see the ball?

Marijuana also helps improve lung health, according to a study published in Journal of the American Medical Association. It helps reverse the carcinogen effects of tobacco, and improves lung health. So here Ahmad Shehzad, our selfie king, is killing two birds with one stone. On one hand he’s reversing the bad effects of smoking, and on the other, he’s strengthening his lungs so that he doesn’t get tired while playing Pakistan’s wars in the cricketing world.

In addition to all these magical benefits that forced Ahmed Shehzad to use marijuana, here is the best one of all: in 2010, researchers at Harvard University suggested that some of the marijuana’s benefits may actually help reduce anxiety, which would improve a person’s mood. Now you know the reason why master blaster has been so consistent with his performance of late.

So let’s not rush into conclusions and be excessively negative about the poor chap’s decision to smoke some weed. Why can’t we look at the positive side for once?