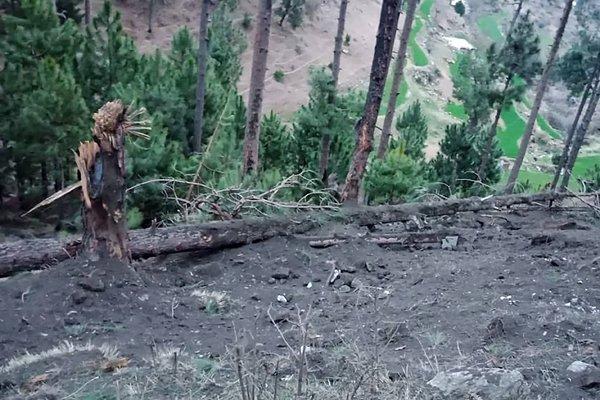 In a Bollywood style, Indian Mirage 2000 jets entered Pakistan’s air space, targeted Jaish terror camps, killing at least 350 and then safely returned to their bases back home. Mission accomplished. The only problem however, is that on the Pakistani side, there is no debris of a destroyed building or any trace of the whooping 350 killed bodies, as claimed by Indian media.

So where did so many bodies go? Did Pakistan tactfully bury them in an unknown place away from any prying eyes? How and when they might have washed the blood stains of so many people killed in a missile attack? Also, did all the 350 people die with all their body parts intact?

If Pakistan is able to cleanse the sight of impact so masterfully and so quickly that only a crater in the middle of woods can be seen with no sign on any debris left, then even if Indian claim is not a figment of a Bollywood director’s thought process, and they actually carried out what they claim to have been carried out, they have committed a blunder to choose Pakistan as their enemy.

So what did happen exactly? Whose version of events has more weight?

First of all, in order to see the destroyed camps and the 350+ bodies of the Jaish terrorists, we will have to wait for the upcoming Bollywood movie.

In real life, as it seems, if we set hysteria and nationalism aside, Indian Air Force did breach Pakistan’s Air Space for a couple of minutes. They did have some targets assigned to them to mitigate, and they intended to do so.

The plan was to have a diversion created over on the other two sectors in Punjab which would create a space for these other planes to go inside Pakistan through Muzaffar Abad sector and hit some targets at Balakot and other surrounding areas.

However, what happened was that Pakistan Air Force scrambled fighter jets in 2.5 minutes after the Radar showed hostile Indian jets approaching Pakistan. And, IAF pilots had to drop their payload arbitrarily to get back to their air space as quickly as possible as because India could not afford one of their plane downed by Pakistan. The political toll of such incident would have been unbearable.

The truth is that in this day and age of technology where virtually everyone holds a camera phone, no country could hide so many casualties and debris of buildings, and that too in such a short time. It is impossible. Any sane mind would rubbish such claims.